The second episode of The Walking Dead Season 6 titled, “JSS” went from lazy Sunday to World War Three in 60 seconds.  We witnessed the dichotomy of survival in an insane world.  Two opposing arguments; in a fight, two opposing weapons. There is a staff and there is a gun, which do you choose?  “Good people are the first to die,” that is why you “can’t take chances anymore.”  You can put up walls but they won’t keep out the danger forever. 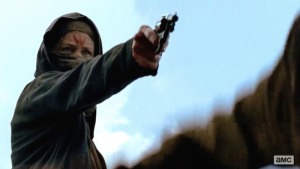 Carol Peletier, a woman who spent most of her life living in fear.  A woman requiring the protection of stronger people for her own survival.  Situations forced her to put aside compassion allowing the strength of conviction to guide her belief; the elimination of danger to keep her family safe.  From her time in the prison community killing sick/infected members, having Lizzie “look at the flowers”, to single-handedly rescuing Rick and the others at Terminus, Carol has evolved into a lethal bad-ass.  In Alexandria, she deliberately appears weak as a means to gain the trust of the community while assessing their strengths and opportunities.  She is the “den-mother” that will bake you cookies and later take out a horde of walkers, while you’re sleeping.

Morgan Jones, after losing his wife in the zombie-apocalypse, did everything he could to keep his son alive.  It wasn’t enough as his son was killed by his dead wife.  He became mentally unstable with a fear of connecting with people.  He was a man unable to let go of the past.  At some point, Morgan adopts the philosophy similar to a Shaolin priest.  Choosing the way of non-lethal confrontations.  His encounter with two members of The Wolves and letting them live demonstrating that even with your life on the line, you don’t have to kill.

The Alexandria Safe Zone was brutally attacked by The Wolves.  Carol and Morgan defended the community as polar opposites.  Morgan believing the attackers could be subdued without killing them and Carol shooting first without question.  Both methods have repercussions.  “It’s an insane world.”  How far can we delve into our narrow perspective of right and wrong and not lose our hold on reality?

Two people debating on the battlefield became sullied in the blood of insanity.  Traveling toward a place where there is no return.

Save 10.0% on select products from p\u016Brlisse with promo code 10PURLISSE, through 5/28 while supplies last.

Save 10.0% on select products from Zollipops with promo code 10VEGAN, through 6/30 while supplies last.