This was Thanos’ story. 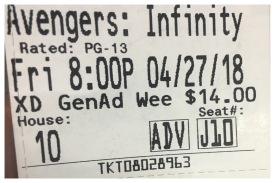 It started where we left off at the conclusion of Thor: Ragnarok.  Thanos and his Black Order defeat Thor and the Asgardians, in space.  He had the Power Stone in his possession and took the Space Stone from Loki.    He quickly claimed the Reality Stone and took Gamora to obtain the Soul Stone.  The Time Stone and the Mind Stone were more challenging to achieve due to the combined forces of The Avengers, The Guardians of the Galaxy, and Doctor Strange.  Despite two spectacular battles, Thanos took those remaining Infinity Stones and fulfilled his goal of wiping out half of the galaxy, with the snap of his fingers.

We learned that on his homeworld, Titan, there were more people than resources so, Thanos decided to randomly eliminate half of their population to save it.  In the end, his world was decimated.  The Titan took to the stars and began his galactic conquest to bring balance to the universe.  Thanos’ story is one of sacrifice for a higher purpose, for the power required to complete his goal.  His world destroyed.  The end of his daughter, Gamora.  The death of his children, the Black Order.

So much death in the beginning and so much death at the end. For the first time, Thanos gets to see his sunrise with a smile while things look hopeless for our remaining heroes. The ending is one hum-dinger of a cliffhanger; having to wait a year for the conclusion will have me feeling anxious before the end of the summer.

The Russo Brothers did an excellent job connecting the audience with the meaning behind Thanos’ purpose.  While we may not agree with the heinous actions of this supervillain, we understood the reason behind his madness.