Imagine a typical day, with your family, it’s a morning for a new beginning. One minute, your feet are planted firmly to the ground, and then suddenly, you are pulled beyond the clouds.

Willa Fowler, the story’s protagonist, was an infant when the world went into a low-gravity state. Her father, Nate, had predicted this event but no one believed him. It was on that day that Willa’s mother, Lilly, floated to her death. The infant Willa took to the low-gravity with ease.

This event is forever known as “G-Day.”

The story moves twenty years later, Willa is working as a courier, and the world is split between those who live in the sky and those who choose to live on the ground. There is a moment that introduces the readers to Edison, who lost his legs on G-Day. Willa wants to leave city limits and travel to other parts of the country but can’t. We learn that Willa has a crush on Edison after a very candid and awkward moment.

Willa can take care of herself in most situations; her understanding of low gravity proves an asset against two guys attempting to rob her while couriering a vital package. Despite that, the worst part of her day is going home.

Willa’s father, Nate, has not left the apartment in years. He is also the reason Willa cannot travel beyond the city of Chicago. Nate blames himself for G-Day because he could have stopped the event from occurring.

Issue two begins with Nate narrating; we learn about his viewpoints on gravity and the studies he conducted that revealed the impending G-Day. “What goes up must come down.” is the horrifying scene of animals, people, and things that floated into space.

Nate believes he can restore gravity and Willa thinks he’s crazy because her father hasn’t left their apartment in twenty years. How is he going to save the world when he can’t bring himself to leave that space.

Willa desperately wants to leave Chicago; Her friends don’t understand why anyone would want to venture outside of the city. Yet, all Willa really wants to do is see another town like Los Angeles or New York. She exemplifies the wandering soul of youth.

Roger Barrows allegedly worked with Willa’s dad on the G-Day research. Will gets the idea that Roger is the one person who can inspire Nate to move forward. She decides to crash a social event that Roger is attending.

Willa tries using her charm to enter the event. When the bouncer notices that she’s carrying a gun, security is called, and a chase ensues. Edison shows up and prevents Willa from getting caught. He gives her suitable clothing and a pair of gravity shoes. Willa suits up and returns to the surface.

Once inside the venue, she locates Roger Barrows and mentions her dad to him. He seemed surprised that Nate is still alive. Willa asks Roger to reunite with Nate, believing this will be a good start for her dad with regaining his confidence. Willa doesn’t know that Roger wants Nate dead and that she is going is the one to help him do it.

A nice take on a coming of age story, “Skyward,” has an exciting sci-fi approach to comic storytelling. Combined with great artwork, this is a really cool series with a lot of potentials. 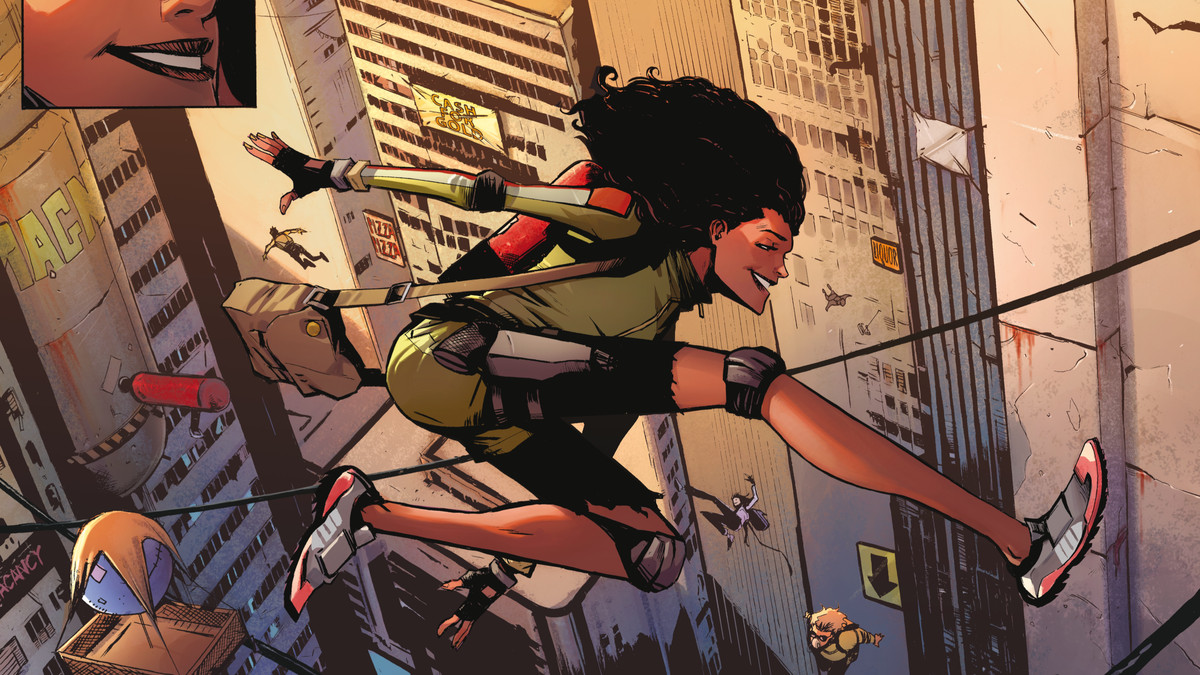