Despite that many of the celebrities cancelled their appearances such as Matt Smith, Karen Gillan, and Eliza Dushku, the ones who kept their commitments made it a decent celebrity event.  Brett Dalton and Elizabeth Henstridge had great chemistry, Paige was fun and lively, and Michael Rooker was very funny.  There were a couple of vendors who were very genuine and very passionate about their craft; it was nice talking to real people.  The volunteers were friendly and helpful; the woman at the VIP checked-in provided great service. 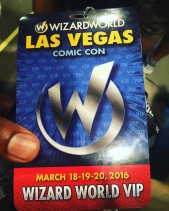 I purchased photo ops on March 18 for “The Agents of Shield” and “WWE Paige”; the people working the photo ops admissions table told us that they would place VIP patrons ahead of the General Admission patrons during the lineup for the photos.

On March 19, at the time of the “The Agents of Shield” photo-op, we arrived 15 minutes ahead of the lineup time.  A dark-haired bearded man working there told us to come at the designated time [10:45 a.m. line up].  When we returned, there were people already in line.  They did not allow us to move to the front of line because we had to wait with General Admission.  When we asked the dark-haired bearded man, “What is the purpose of VIP if we’re considered the same as General Admission?”  His reply, “Customer Service is over there if you want to complain.”

At the time of the “WWE Paige” photo-op [12:30 p.m. line up]; they called the Paige VIP patrons to get in line first.  This is what we expected since that is how those special VIP packages work.  Then they called General Admission to get in line next.  Again, we asked a different employee, “What is the purpose of VIP if we’re considered the same as General Admission?”  The reply, “I don’t know, I just work the photo ops.”

I spent about $600 for VIP passes that was only good for getting us into the convention 30 minutes early.  If I knew then what I know now then I would never have purchased photo ops nor would I have purchased VIP passes.  The experience was a complete 180-degree difference from the experience we had last year.

Note:  last year I paid for the “3-day” general admission and there were more vendors and better celebrity guests.  The VIP guests made it towards the front of the line for autographs and photos, ahead of the general admission guest.  This is why I purchased VIP passes. 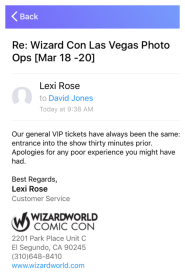 On March 21, 2016 [10:49 a.m.], I sent an email to Wizard World’s Customer Service Representative and the Photo Ops people to let them know about the experience.

On March 22, 2016 [9:38 a.m.], I received the following email reply from Customer Service:  “Our general VIP tickets have always been the same; entrance into the show thirty-minutes prior.  Apologies for any poor experience you might have had.”

I believe there was an alleged apology somewhere in that message.  Anyway, it cost me 40% more money for entrance into the show thirty minutes earlier than general admission,which only happened on Saturday.  On Friday, everyone entered at the same time and on Sunday everyone entered at the same time however, the VIP guest walked in first.  Whatever good memories I had from last year’s convention, this year ruined them.

The proverbial salt in the wound…

3 responses to “The VIP Experience”