The Man Without Fear

“Forgive me father, not for what I have done but for what I am about to do.” The devil confesses his sins; the preconceived transgressions that he will inflict on the demons of Hell’s Kitchen.

“We get knocked down and we get back up…” He can take a beating…a lesson he learned from his father. A blind lawyer fighting for justice, crossing the lines others refuse to see. Morality is a thread connecting the perception of right and wrong. It tethers a tormented soul to a world on fire. Heroes, villains, angels, and demons fighting for their agendas. The rules created with elastic fibers; the world turning on a fragile axis. 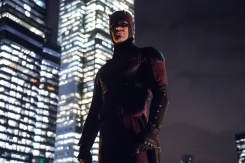 Marvel Entertainment did an excellent job bringing Matt Murdock a.k.a. Daredevil to the small screen via Netflix. Season one was a lot like “Batman Year One” taking us through Daredevil’s beginning in Hell’s Kitchen, this city in fear of a Kingpin’s grip.

The man without fear decides to take on Wilson Fisk to keep his city safe. The comparison between Murdock (protagonist) and Fisk (antagonist) draws a lot similarities,they are two sides of the same coin. Both losing their fathers during their childhood…both men willing to cross the line in order to achieve their personal goals. Throughout the episodes, there are these moments of confession, these small opportunities to remove the weight of guilt and to cleanse sullied spirits. I would summarize the protagonist and antagonist as both dangerous and noble men.

The things they tell themselves to justify their actions. The ends having to justify the means. Men fed up with the status-quo; they are conflicted within their ideologies. No martyrs, only casualties. The masks worn to hide their vulnerabilities; the names hidden to feign innocence. A city full of puppets controlled by one man’s strings. The cloak of conviction covering a multitude of sins.

The level of action was excellent, someone was guaranteed to get his and her ass kicked or worse. Blood, guts, and brains staining the environment. Broken bones given in exchange for information. Dirty cops obstructing justice, contaminating the force sworn to protect and serve. Behind every door is a story, a truth, and a lie. Every so often we see our anti-hero falling from great heights, spitting blood, and getting up again. 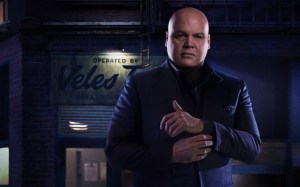 From time to time, there is someone who sees the truth beneath the mask and questions the reasons crafting this reality. Questions leading to more questions until all that remains are dust and bones. Then comes the moment of acceptance because there are worse things in the world. Seldom is there peace but there is always war. The war in which we fight against our enemies and ourselves. Collateral damage are the remains of new world. Those who survive are left with difficult choices. Alliances are important and difficult; close relationships often lead to complications. In the end, everything has a price and outcomes come with a heavy cost.

The psychology is what makes and breaks these men. “I’m not a killer,” and “I’m not a monster,” yet everyone has a “devil” inside them and the show conveyed that very well.