This story continues where issue four climatically ended.  Battle World mourns the loss of Sheriff Strange and God Doom accuses the survivors of the final incursion of the murder.  “We live our lives by the choices we make.”  In this issue, 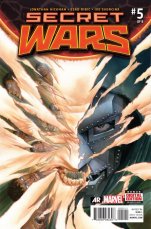 Doom secretly meets with Owen Reece (aka the Molecule Man) and we learn what happened  with Doom, Strange, Molecule Man and the Beyonders during the final incursion.  “The scale of it…the scope…how do you choose who lives and dies…?”  Valleria and her team, the Future Foundation, put plans in place to carry out Doom’s will and find the rebels who pose a threat to their world.  “We’re going to take this all the way to the end of the line.  No matter where it goes.”  Soon, we will see what happened to those Strange scattered across Battle World and eventually, the outcome of Doom’s master plan.

This series may be one of Marvel’s best ever.  Each book has left me captivated and desperate for the next issue and this issue was no different.

Every Moment is a Story