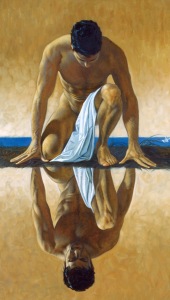 The sunrise is the moment for a man to ponder the effect of past events on the present moment.  Dressed in dark colors inconspicuous; the wardrobe mimics the morning sky.  He places a finger to his mind, directing his thoughts to the decision that fate happens for a reason. A reason requiring keen insight from the divine to decipher its riddle disguised as purpose.

He stares towards the perennial peak of a hill and recalls the feeling of disappointment at his failed ambitions dictated by the imposing expectations implanted within his childhood.  His perception is now a broken compass; misguiding his spirit through the fog of unsolicited opinions.  Those countless decisions are wavering within the gust of a thousand voices.   Today becomes the younger twin of Yesterday both determined to clone their DNA upon Tomorrow.  Alone with his thoughts as his misery is unable to find the company it seeks.

The endless pursuit towards a woman’s affection he has never known yet forever seen. He finds delight for this notion of interest with an acceptable persona that is his own; relieved because his physical appearance is unimportant compared to that which resides inside his blemished shell; to behold love within the unseen.

He shares his time revealing the secrets of his soul. Expressing emotional depth, no one else could comprehend. His heart bleeds poetic verses; transfusions along the emptiness of existence with companionship. The bittersweet taste of love confuses his senses getting his emotions twisted.  Souls entwined on the fragile plain of romance.

Time grants him an opportunity to propose commitment that he recognizes and she fails to understand. Her past she could not deny. He offered sacred vows upon a bed of enchantment. She could not accept. He offered his life in exchange for her honor.  She left with words unspoken.

Misty skies dim the sunlight and darken his eyes. His heart now absent from his body. His grief pours like torrential rain. He trails his fingers along the silhouette her absence provided.  The days become ordinary while containing a choice to reconsider.

This reconsideration led him to grieve the injustice shackled upon humanity. He grips war by the handle and strikes with irresistible force upon the once immovable object of hate. He finds himself guilty of hostilities for the sake of peace.  There is no trial for his crimes of war.

He seeks admonishment for his guilt; left with a confession upon his heart. His apologies fall silently into the void neither heard nor acknowledged. A single dove’s feather falls upon him carrying a single drop of spilled blood. He tattoos a mark of shame on his heart.

He watches the flames of those he loved extinguished and becoming vapors in the wind. The unexpected storm carries away the souls of so many he loved, knew and connected. Standing at the sites of engraved eulogies, he grieves; not just for the loss but also for the opportunities missed.  Loneliness conceived from the womb of absence.  The act of kindness is a dying breed.  He grieves until the end of the falling rain.

He stares into the abyss of abandoned memories; seeing her eyes staring back at him stirring the pain in his soul. Spirits of the past ascend from the void singing songs of antagonism; recalling the moments that provoke his anger and call his anguish. 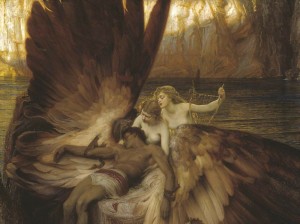 He decides to satisfy the spirits of torment with a sacrifice. Reaching within the thorns of his body, he removes his pride and lays it upon an altar of forgiveness; letting go of all that he was and silencing his demons.

He studies the recollections kept within his cerebral journal; appraising the significance. Always learning, continuously evaluating and never mastering.  He lies down upon his experiences, watching day fade slowly towards night. He receives a gentle kiss from the lips of Serenity as his soul nestles in the bosom of Peace.