We watched the Alexandria community defend themselves against the Wolves, and an overwhelming horde of Zombies.  Our hearts stopped when we saw the perpetual death of Glenn Rhee and we breathed a sigh of relief during his resurrection from beneath the dumpster.  Father Gabriel’s rebirth from fearful pacifist to last rites warrior, the loss of Carl’s right eye, and the deaths of Deanna and Denise were significant milestones along the journey of the Alexandrian Survivors.

Daryl’s attempt to bring Dwight and his girls into the Alexandria community backfired; he lost his bike and his crossbow.  Carol’s transformation into a lethal-mom created a sad introspection and a reflection of horror.  Morgan’s belief that all life is precious forces a confrontation with Carol and puts him at odds with Rick’s position of not taking chances.  Abraham develops feelings for Sasha and emotionally detaches himself from Rosita.  Eugene’s maturity as a contributor to the community’s survival, calling “dibs”.  Rick and Michonne becoming a couple.  Glenn and Maggie expecting a baby.

Daryl, Sasha and Abraham’s encounter with a band of bikers, the arrival of Jesus, the food shortage of Alexandria, and the plight of the Hilltop residents introduces Rick and the Survivors to the threat of the Saviors.  Rick’s mantra, “We come for them before they come for us,” becomes the motivation for an all out assault against the Saviors and the search for Negan.  I finally realized that the biggest threat to Alexandria’s survival is the psychological trauma each member is dealing with.

Their all out assault did nothing but add fuel to the fire.  “We are all Negan.”  The enemy is larger and more threatening than expected.  Ricks confidence with destroying them puts Alexandria in the middle of an all out war.

In last week’s episode, Alexandria’s best people were out in the field and separated.  Morgan is searching for Carol.  Dwight captures Glenn and Michonne then ambushes Daryl and shoots him.  We are left to ponder their fate as the screen fades to black.

Season 6 Finale:
Tonight, we see a bit of foreshadowing as Saviors chase a man through the woods and beat him senseless as an example because he and his group decided to fight back against the Saviors. 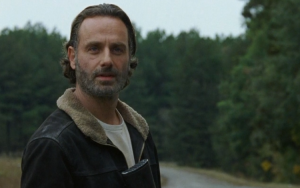 Maggie’s complication with her baby forces Rick to take her and a team to Hilltop.  Carl and Enid argue over Carl’s desire to go with Rick in hope to fight the Saviors.  He eventually locks Enid in  room with the message, “just survive somehow.”  Father Gabriel is placed in charge of Alexandria’s defense and receives Rick’s trust.

Morgan finds the horse as he is being followed by one o the Saviors Carol wounded.  Carol is found by Morgan and reveals a very bad wound.  Morgan treats her wound and offers to take her back to Alexandria; Carol refuses to go.

On the road to Hilltop, Rick and the group encounter the Saviors and their captive.  They are at a stand still.  Rick asks, “Do you want to make this day your last day on Earth?”  The lead Savior reminds Rick that it could be there last day on Earth and that he should be kind to everyone on the RV because at a moment’s notice, one of them might be gone tomorrow. 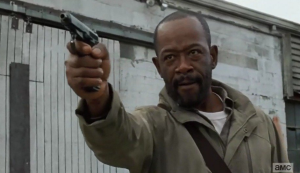 I believe Rick’s decision to walk away placed the group in immediate danger.  Morgan and Carol continue debating their idealogical differences.  Killing for those you love versus the prevention of death.  The price of caring for people.

Saviors continue boxing Rick and the group in by preventing passage from the available main roads.  They have a well orchestrated plan…road blocks and mind games…things are getting real.  Carol is taken down and forced into a slow agonizing death; Morgan arrives and offers the attacker a chance to live.  Morgan kills to save Carol’s life.   Two men find them and get help; I believe they are from the Kingdom.

More roadblocks and body dropped from an overpass and hung to death.  The deviations intent on keeping Rick and the others distracted.  Eugene comes up with a plan to throw the Saviors off guard and allow Maggie to get to Hilltop; we watch Rick and Abraham tell him goodbye.

Even the best laid plans can go wrong, for Rick.  We hear the “whistling”.  We see the Saviors waiting for Rick, Sasha, Abraham, Aaron, Carl, and Maggie as they were moving on foot through the woods.  The Saviors directed them right where they wanted them.  Eugene did not get very far either.

The last fifteen minutes brought the most tension. Everyone down on their knees.  Rick looking like Death  tapped him on the shoulder.   Dwight shows up pulling a wounded Daryl, Michonne, Rosita, and Glenn from the back of a vehicle.  Glenn is surprised and concerned with seeing Maggie there.  Then everyone meets Negan.

Negan introduces himself to Rick and lets him know that he is going to regret crossing him.  It was the most impressive monologuing from an antagonist.  No one is safe.  “You didn’t really think you were going to get through this without being punished, did you?”   Negan promised to beat the holy-hell out of one of the survivors.  He introduced his captives to “Lucille”.  When he can’t decide who is getting punished, he does the “eeny-meeny-miny-moe” game of choice and picks “the very best one.”  The bat is swung, we hear the crushing of brains and bones, people screaming as everything fades to black.

This episode is right out of The Walking Dead  volume 17 comic titled “Something to Fear.”  The level of anticipation and anxiety while watching everything moving towards the climax was intense.  The blood running down the screen from Negan’s intended victim was a nice touch.

This season ends traumatically and next season we will find out the long-term effect of this moment on the rest of the Survivors.
Now, we spend the next six-months waiting, guessing, and pondering.  Hopefully, “Fear The Walking Dead” will give us something else to think about in the interim.