I don’t like flying, not due to fear of heights but due to all of the travel related headaches I go through from airport check-in to crowded planes.  United Airlines has never been a favorite choice of travel for me and this latest situation just solidifies my position. 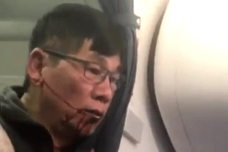 A passenger, David Dao, on UA flight 3411 at Chicago’s O’Hare Airport with a destination of Louisville, KY was forcibly removed from the overbooked flight, https://www.theguardian.com/us-news/2017/apr/10/united-airlines-video-passenger-removed-overbooked-flight, for refusing to give up his seat.  He claimed to be a physician and needed to see his patients in Louisville in the morning. Several passengers captured the incident and posted it to social media.

Overbooking by airlines is considered, for some companies, a necessity.  According to John Strickland, aviation expert, http://www.cnbc.com/2017/04/11/united-airlines-passenger-dragged-off-flight-video-overbooking.html, who states:

“Overbooking is a necessity for airlines due to different levels of no-show passengers experienced on different routes. It’s normally a highly sophisticated process based on extensive detailed statistical analysis.”

I don’t understand, if United Airlines deliberately over books a flight and paid passengers are occupying seats then why are they making these passengers give up seats?  One reason is this according to airline spokeswoman Maddie King,  http://money.cnn.com/2017/04/10/news/united-overbooking-policy/,

“Four crew members needed to board the United flight, operated by regional partner Republic Airlines, in order to work another flight in Louisville the following day or else that flight would be canceled.”

This is why United CEO Oscar Munoz claims his employees followed procedures, https://www.theguardian.com/world/2017/apr/11/united-airlines-boss-oliver-munoz-says-passenger-belligerent, claiming the passenger was “belligerent”.   The article noted, “The US Department of Transportation said it was reviewing whether United Airlines had complied with overbook rules that require airlines to set guidelines on how passengers are denied boarding if they do not volunteer to give up their seats.”  Regardless, this situation, which follows the “leggings” incident,  is giving United Airlines a public relations nightmare.

Social media responded to the incident…viciously:

#NewUnitedAirlinesMottos. Is this how you treat paying customers @united ?? pic.twitter.com/k3DT84vnhP

#NewUnitedAirlinesMottos you cannot return to an upright position