Taken Away By The Storm 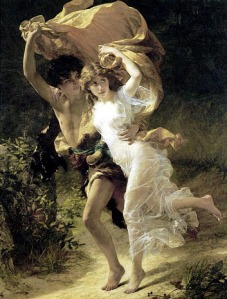 I watched her sleep, captivated by her beauty.  She looked like an angel in the early morning light, my angel, and my sunshine.  Her big brown eyes opened as my gaze caught hers and we smiled.  We had been through so much together and it seemed that the worst was behind us.

We decided to take a journey on this beautiful day.  It did not matter where we went as long as we were together.  We held hands as we walked, our hearts filled with excitement with each step we took.  Ahead of us was an oasis, the most beautiful and serene place we had ever seen.  It felt like we were entering heaven.

We laid next to each other, staring at the sky and naming the clouds that rolled by.  A gentle breeze touched our faces, like a soft kiss.  We closed our eyes and soaked in the moment, wanting it to last forever.

Then, the sun faded behind the clouds and the rain fell softly to the ground.  Something warned me that things were not right.  We needed to leave but she was already gone.  The rain fell harder and the wind began to blow, obscuring my vision.  I could hear her voice cry out, “Where are you, I need you!”

The wind seemed to blow harder as if to push me away from her; blinded by the storm, I reached for her hoping for the slightest touch of her hand.  Her voice seemed more distant, as she said, “Please don’t leave me here.”  The harder I struggled to get to her, the further away she seemed.

While the weight of the rain pushed me to the ground, it was the grief in my heart that kept me there.  Her cries for help became nothing more than a whisper that seemed to fade away.  For the first time, I felt helpless believing the situation to be hopeless.

The rain and wind continued as I lay on the ground finding it difficult to stand.  I lifted my eyes to see the oasis destroyed; our heaven was gone.  Worse than that, she was gone, somehow taken away by the storm.

It was at that moment I realized I was now alone.