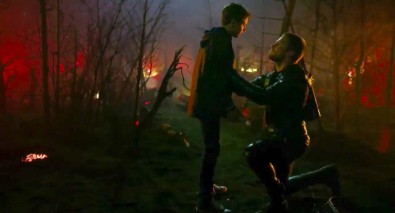 The episode begins with team Arrow (Green Arrow, Spartan, Black Canary, Mad Dog, and Mr. Terrific) taking on thugs at one of Star City’s docks, trying to stop Faust from launching an armed missile.  The action is swift. Felicity monitors the situation as Overwatch. Mr. Terrific stops the missile with one of his T-Spheres.  We later learn that Faust is working with Black Siren.  Their plans seem obvious yet are full of misdirections for team Arrow.

The flashback scenes are events during and after the Lian Yu island explosion.  We see bits and pieces, figuratively and literally.  There is the death of William’s mother and Thea’s severe injuries. There are lingering repercussions in the air.   The episode ends with the theft of one of Mr. Terrific’s T-Spheres. and the public revelation that Mayor Queen is the Green Arrow.

There are some personal struggles since the event on Lian Yu.  Oliver Queen is struggling to establish a relationship with his son William. William calls him “the bad man” who killed his mom. His conflict is balancing the roles of mayor, vigilante, and now, father. John Diggle is experiencing a conflict with killing, or at least with shooting people. I’m not sure where this fear originates. Hopefully, the revelation will happen soon. Deputy Mayor, Quentin Lance’s conflict with his feelings versus his conscious as it relates to the Black Siren. He shot her on Lian Yu to save the Black Canary, but it is not something he can bring himself to repeat.

I enjoyed this episode and the new use of flashbacks to tell the story of events from the end of last season.  It is interesting to find out how team Arrow handles their post-traumatic ordeals.

Every Moment is a Story